Why the Hyundai Kona Electric is a game changer… 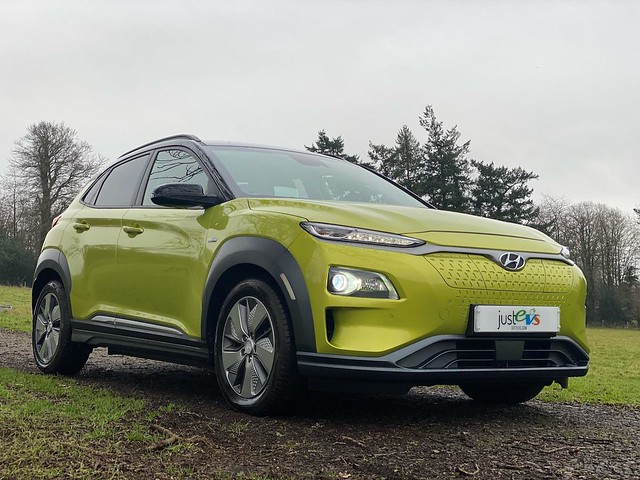 Last week we part-exchanged our treasured Nissan Leaf (30kWh) for a Hyundai Kona Electric (64kWh). Although we’ve been Electric Vehicle (EV) owners for over two years I couldn’t have predicted, and I’m really surprised, how fundamentally this upgrade has effected the way we use and feel about EVs. Learning about EVs is clearly an experiential process.

In 2019 as part of the process of moving out of our motorhome and into our new-found home, and becoming grandparents, we decided that the time had come to upgrade from our fairly aged, humble Toyota Aygo. We were very keen to be part of the move to EVs and so bought a secondhand Nissan Leaf (30kWh). This had a range of 120miles and on average this is what we got. When we exchanged the Leaf we had achieved an overall average of 4.1 miles per kWh – 30kWh x 4.1miles/kWh = 123miles. However, this was an average and varied a lot between the warm summer months and the winter. The other thing you learn as a new EV driver is that you never run the battery flat (hopefully) so you’ll always want to land at a charging point with at least 10miles in hand – that effectively reduces the range to 110miles. Then, if you’re using fast chargers to make a long journey, these generally do not fully charge your vehicle and usually stop at 80% or 90% charge, so you probably only get 80 or 90miles of real driving between charges on a car with a range of 120miles.

During the two years of Leaf ownership we only needed to do 5 or 6 non-local journeys and so these limitations didn’t affect us much. However, we did need to adopt a different mindset for these journeys. Firstly, we had to think in terms of reaching the first charging point (not our final destination) and then moving on to our final destination after a fast charge. Ideally, the charging point would be a nice hotel which served decent coffee but often it was a lorry park in a motorway services – not so nice. On one occasion we had to fast charge twice on a journey and the battery temperature became very high. The Nissan Leaf does not have an active battery cooling (or warming) mechanism. It relies on airflow I believe.

A surprise with the Leaf was the fact that moving to an EV was no compromise in terms of performance or vehicle comfort. The Leaf was the fastest accelerating car we’d ever owned – admittedly, we’ve never owned a performance car. It had a Bose sound system, an LCD display for the navigation system, 360degree cameras and so on.

So in summary, our Leaf experience was very positive and as a result we vowed that we would never go back to a non-all-electric car.

When we bought the Leaf we decided we needed to change our approach to car ownership. In the past we’d bought secondhand cars, run them for many, many years, incurring higher and higher repair bills and then needed to find a large amount of money to start the cycle again. When we bought the Leaf we bought it fairly new (two years old) with the idea of changing it after three years for another ‘nearly new’ EV. The only challenge to this plan was the fact that when we moved to part-exchange it, the Leaf had depreciated much more than we thought it would – a whopping £4,000 per year. After the initial shock, we reconciled our feelings with the thought that we’d contributed to the move of the population to EVs by making secondhand vehicles a lot more affordable!

There were other things that pushed us to upgrade. With the COVID lockdown easing we wanted to be able to make longer journeys more easily and my 65th birthday was approaching! We went back to JustEVs, where we’d bought our Leaf, and found a 64kWh Hyundai Kona Electric on their website. It was a bit of an impulse decision (my birthday was fast approaching) but having made the decision, I binged on Kona Electric videos and reviews and realised that we’d probably made a very good choice.

Anyway, we’ve just done a 425-mile round trip, cruising at 72 miles an hour at every opportunity at not had to use a fast charger at all. Incredible! The journey went like this:

We literally experienced no ‘range anxiety’ at all and drove as fast as legally possible. We spent no time ‘waiting’ for the car to charge, all charging was done at our destinations and these were only ‘top-ups’. We planned the legs of our journeys as you would for a non-electric car, that is from starting point to destination and not from starting point to fast charger. This really was a game-changing experience. We are now planning a trip to our friends in the Dordogne – something we would not have contemplated in the Leaf.

Summary of other observations

I could go on, but I’ll leave it there for now. I’m happy to answer any questions – just leave them in the comments.

This entry was posted in Electric Vehicle. Bookmark the permalink.