Today Ben continued working on the righthand truss and I worked on the ridge beam.

The ridge beam work was particularly interesting. The ridge beam timber turned out to be the most bent bit in the whole building. If you look carefully you may be able to see this from the image below (click on the image to see it full-size on Flickr). It curves up – to the right in this image. So we designated this to be the top face of the ridge. 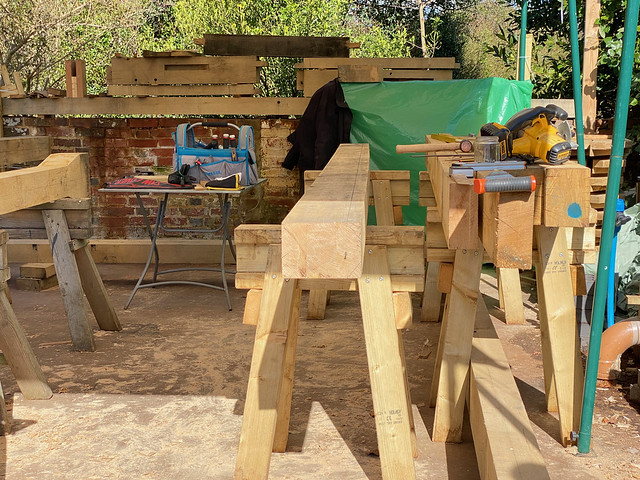 Having established this, I marked out the bevels that are required along the top edges. I did this by marking the bevels on the two ends and running a tight line between them. You can see from the image above how this straight line moves away from the righthand edge of the timber half way along its length.

I then cut the the bevels. My saw went through the timber with no problem but it did eat up the batteries. It was a question of “all batteries on deck”! 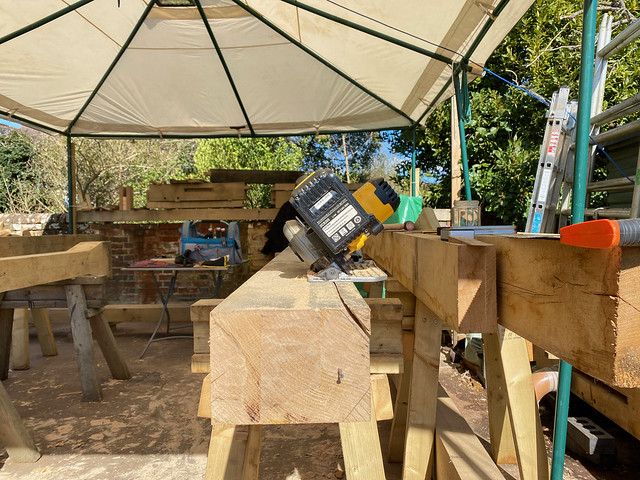 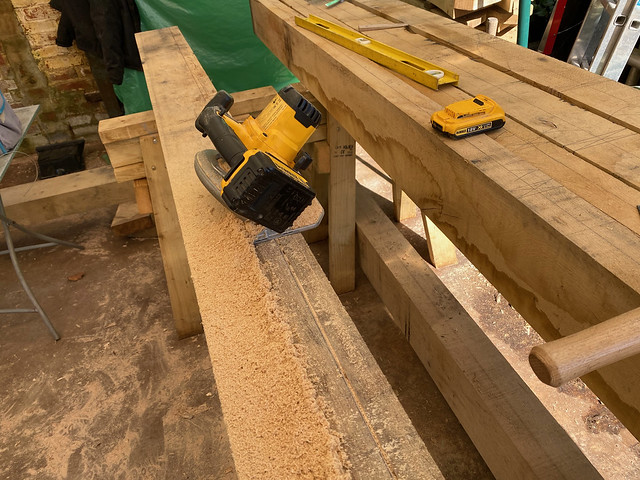 In the middle of the beam, because of the bow, the saw didn’t quite complete the cut and this had to be done by hand. 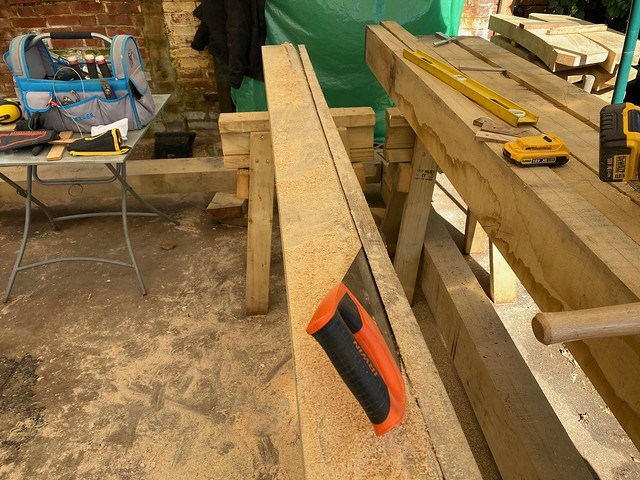 With the two bevels cut, the flat surface remaining on the top of the beam was a lot narrower in the middle because of the bow in the timber. To correct this I ran a tight line from end to end along the top edge of each bevel. This image shows how much had to come off in the centre of the ridge beam to make it straight and true. 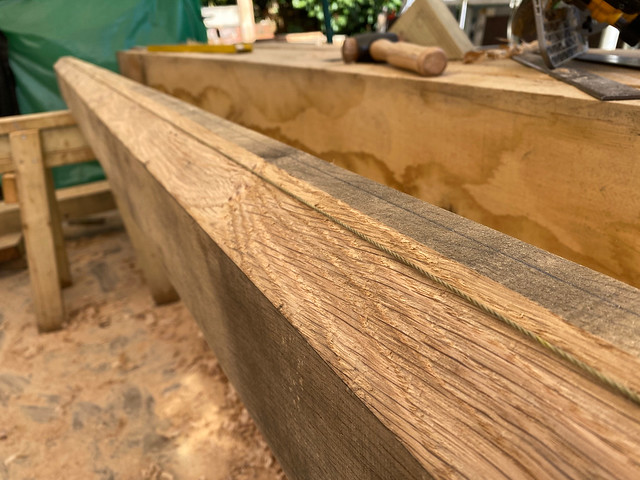 I took most of this off with an electric plane and finished it with a hand plane. In the end it looked like this: 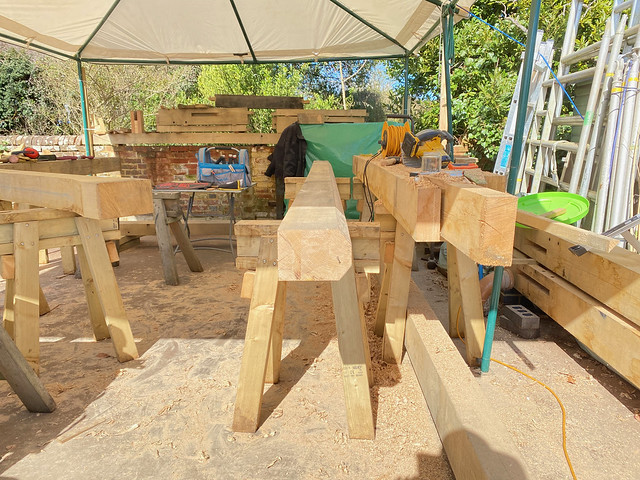 The top face of the ridge beam is now straight and true while a curve remains on the under edge – which is fine.

With the ridge beam straight – at least along its top edge – I marked out the joints that will fit in the top of the two king posts. This was great fun.

I marked them out taking the centre lines for these joints “off-plan” from the post centre measurements. 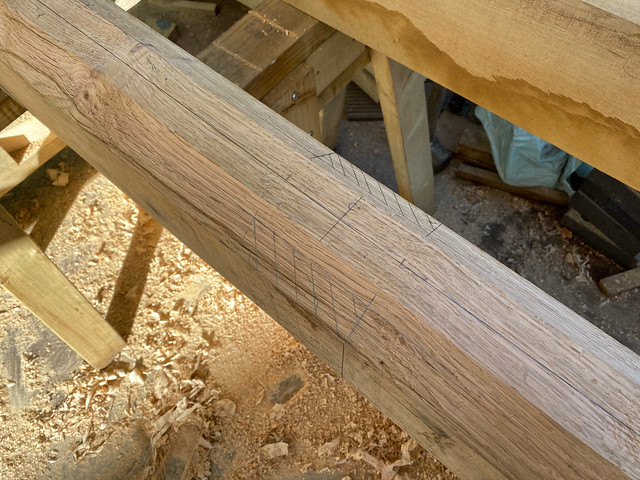 I then cross-cut the waste to the correct depth. 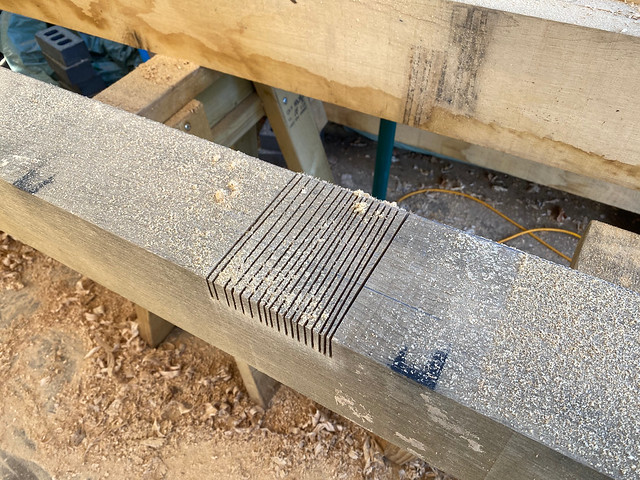 Knocking out the waste and finishing by hand with a chisel. 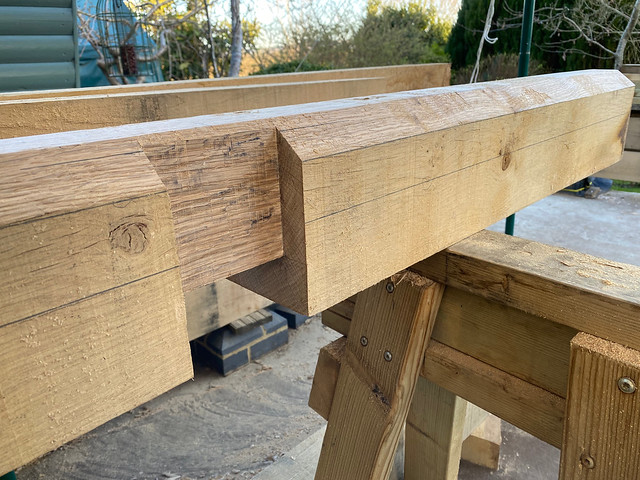 Meanwhile, Ben made great progress with the truss. By the end of the day, the king post was in place, the first principal rafter laid up and he had started to mark up the principal rafter joints. 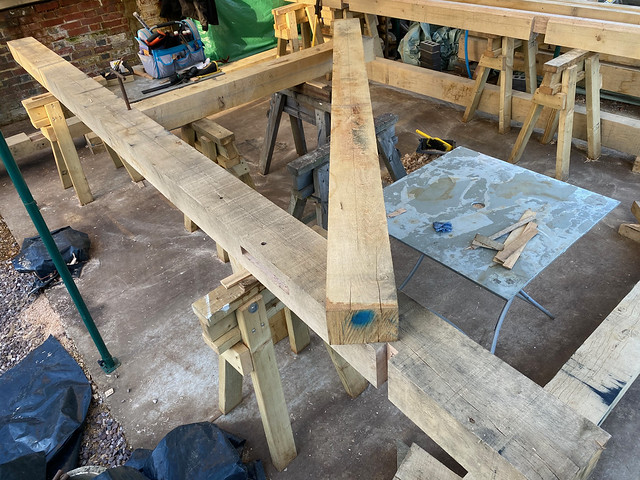 We are having the weekend off and will start up again on Monday.