I worked by myself today and progressed very steadily and slowly. I am very anxious about making an error but determined that anxiety should not undermine the enjoyment of this project. So the rule is “go steady, check everything half a dozen times and make no mistakes”.

I started on the front wall with the objective of joining the two bits of timber that make up the wall plate with a scarf joint. 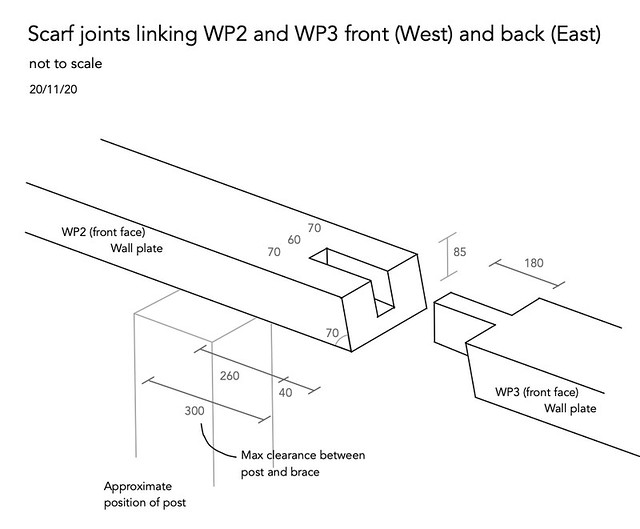 First I had to establish a face side and face edge. On the shorter piece of timber this was easy. At the point I chose for the face side, the edge was perfectly square. On the longer piece I had to make the edge square with my rebate plane. 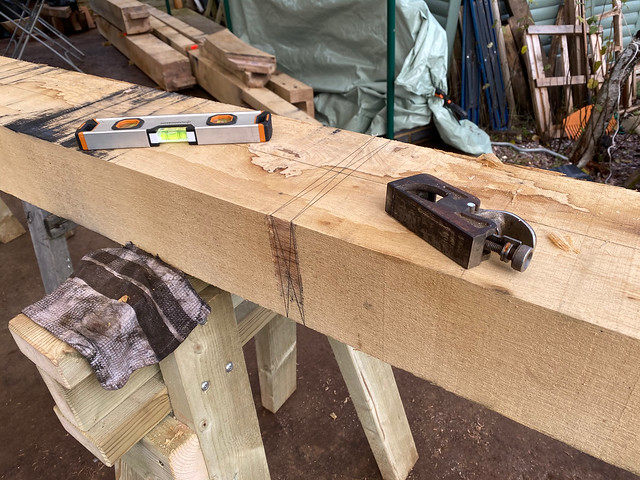 Then I needed to establish a centre line down the face sides and face edges. First I tried the traditional way with a chalk line and made a right hash of that. So I decided to try the laser. I laid a piece of dry oak with a vertical line on the centre point at the far end of the timber… 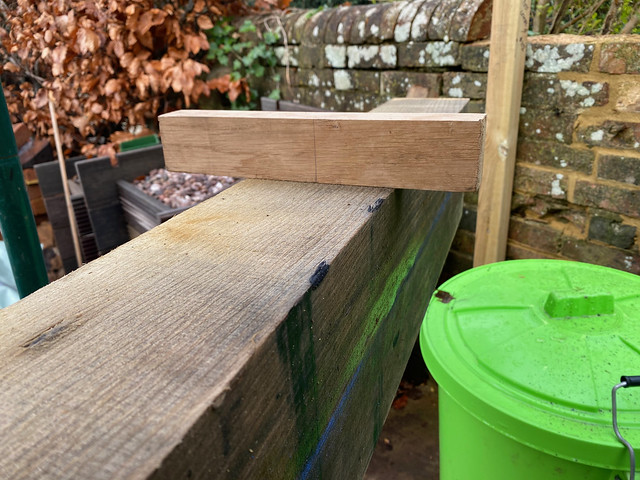 …and placed the laser on the centre line at the other end and switched it on. 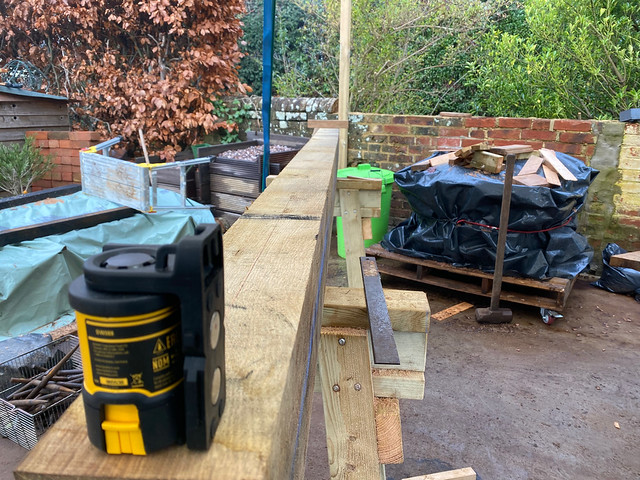 I then recruited Jane to help me adjust the laser so that the beam fell on the vertical centre line at the far end. This was tricky. The slightest movement of the laser and the top of the timber moved the beam a lot at the other end. But we did it.

I then worked along the length of the beam with a straight edge and another bit of dry oak and marked the centre line with pencil. 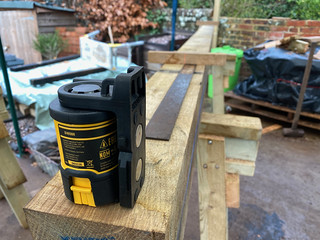 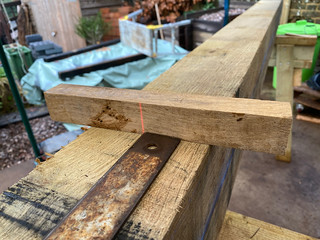 This worked really well. I won’t use a chalk line again. With the centre lines in place on both face sides and face edges I started thinking about the joint.

I started by cutting the slanted shoulder on the mortice side of the joint and then lined the beams up, straight and level and alongside each other in the area of the joint. 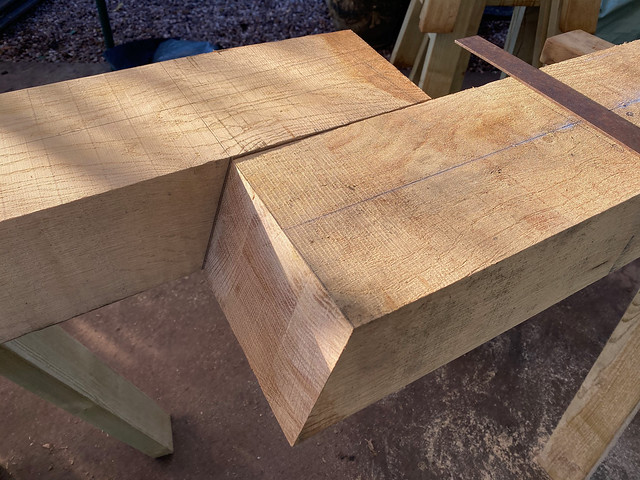 Although both beams were straight and level you can see that, in the area of the joint they did not line up perfectly. One of the beams seemed to dip at the end. I consulted with Ben via WhatsApp at this point and his advice was to “trust my centre lines and proceed”, which I did.

I marked up as much of the tenon and mortice as I could with the beams in this position, then separated them, levelled them up again separately and completed the mark-up. 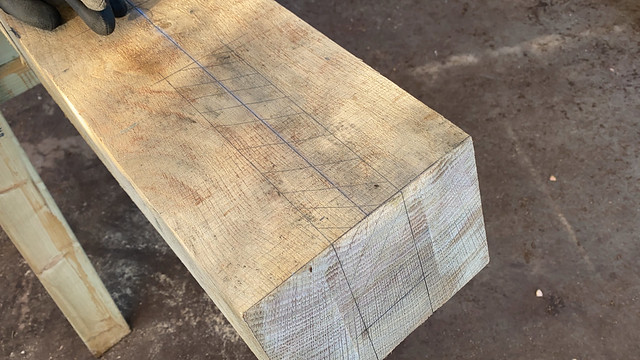 I cut the tenon… 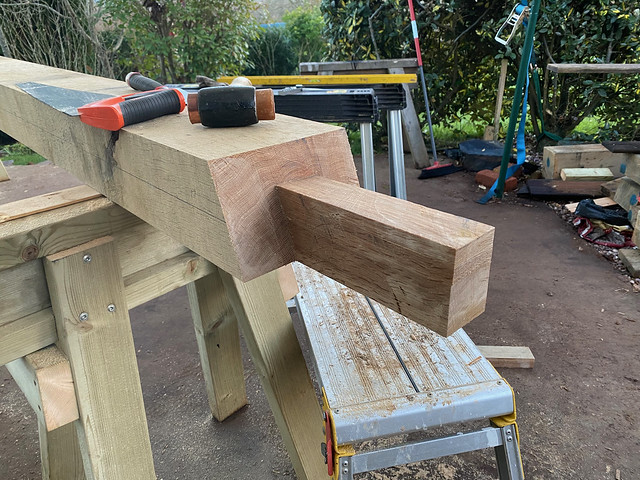 …flipped the beam the right way up and measured the depth of the tenon so that I knew what depth to make the mortice. 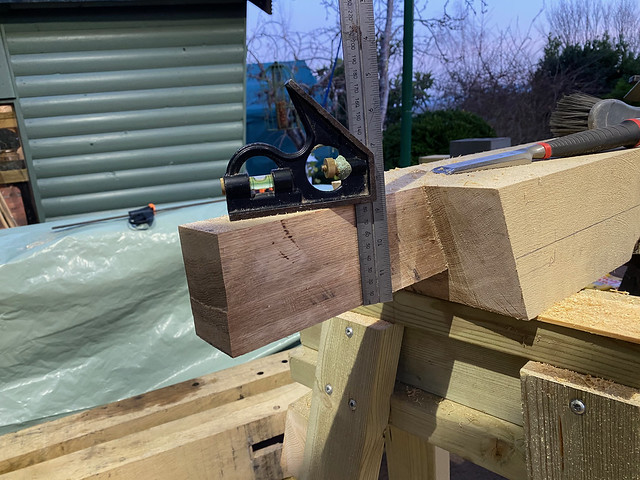 As well as using the square to check the depth of the mortice as I went along, I also transferred this depth to the chisel using a Sharpie felt tip pen. 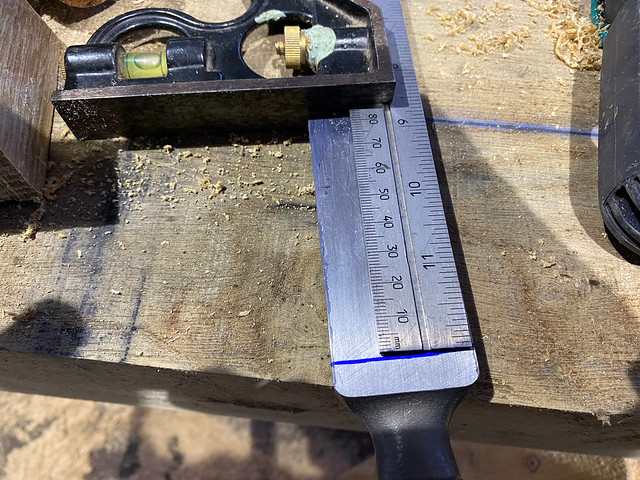 I removed as much of the mortice as I could with the morticer and finished with my circular saw and chisel. 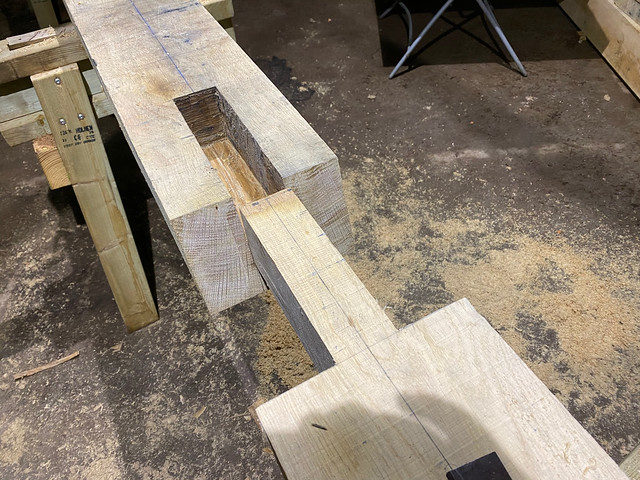 And this was where the day ended. There is still some fettling to be done but the joint is nearly there.