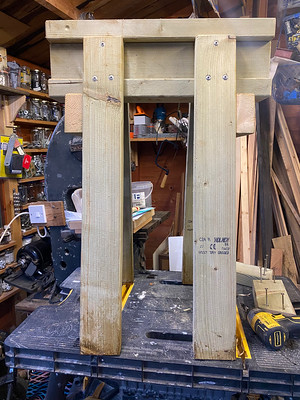 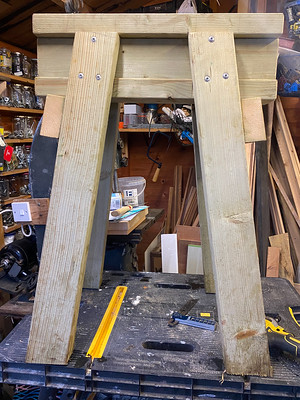 Today the weather was awful. There was no prospect of working on the frame so I decided to work in the dry on something that was worrying me – the instability of our trestles.

I described their construction in a previous blog post. Although they were fairly simple to make, because of their straight legs they are very unstable. This problem is exacerbated by the fact that they are narrower than most trestles you’ll see. This means that we cannot turn over a 200 x 200mm piece of oak in one go. If you did the trestle would fall over and we did have such an incident yesterday. Fortunately, no one was hurt but we could have been unlucky.

Falling over aside, any sideways work across a timber like using a rebate plane across a tenon will make the straight-legged trestle wobble (Ben has let me know that this “was getting to him”!).

So, one by one, I’m taking the legs off the trestles, putting and double angle on the top and bottom of each leg and reassembling them. It took a while to set up my flip-over saw correctly to make these cuts but once this was done, it didn’t take long to do the first five.

This feels like a fairly minor modification but the effect is huge (see the images above) both visually and functionally. They are now very stable.

I’ll do the other three tomorrow.