Getting into the Green Oak Mindset – the green oak barn

I am struggling to get out of the ‘making a jewellery box for my mum’ mindset and into the ‘green oak framing’ mindset. When you’re making a jewellery box for your mum, which I did when at school, you have to be very precise. With oak framing, I’m learning that it’s different, and I’d like to thank Ben for taking me on this journey. Oak framing still has to be precise – those posts have got to land on those brick plinths we built, millimetre perfect – but it’s a different sort of precision. Let me try and demonstrate this from an example from today.

Rain stopped play yesterday so I used the time to remodel our trestles. This meant that each trestle came out from under the frame, was remodelled and replaced – one by one. So the first task this morning was to get everything straight and level again.

I was working on a post/wall plate joint. 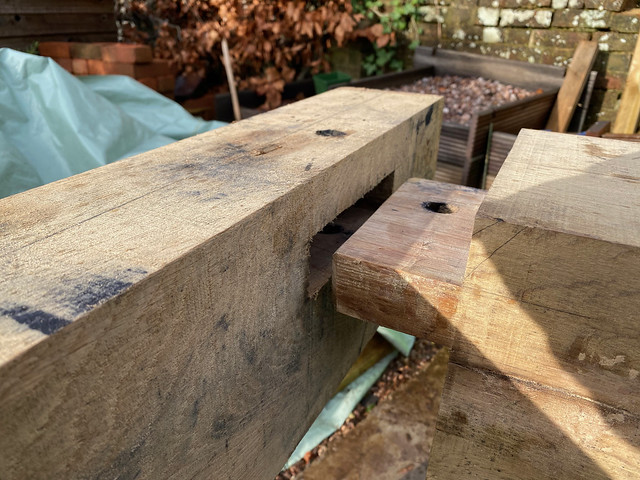 I’d left the joint together, pinned and straight and level. But as the trestles had been taken in and out, before resuming work on the brace between these two members I had to make sure everything was straight and level again. With the joint assembled this proved impossible to do. When post was level the wall plate was twisted, when the wall plate was level the post wasn’t. In the 40hrs since I last worked on this joint the timber had moved.

My joint was a tight, jewellery box type joint which was not allowing any independence of movement between the wall plate and the post. I needed to introduce some play into this joint if I was to get both members straight and level again. However, I needed to introduce the right sort of play. After a consultation with Ben, I proceeded as follows.

I needed to make the tenon thinner to give me the play I needed but it was really important how I did this. At this time, with the joint assembled, the top face of the post (which will be on the outside of the building) is sitting perfectly flush with the top face of the wall plate. So, if I removed material from the underside of the tenon and hammered a peg in from the outside of the building, the post would move inwards and would no longer be flush with the wall plate. To avoid this, material had to be removed from the top of the tenon. I didn’t need to remove much – just between 1 and 2mm. 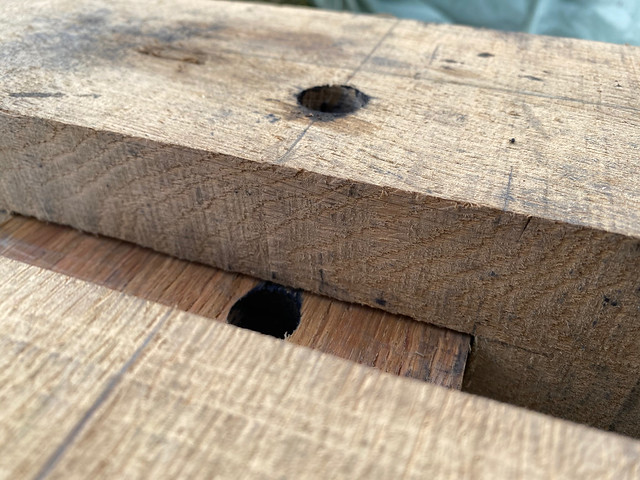 With the post and wall plate straight and level I was able to start on the brace joints. At the end of the day I’d got the brace tenons cut and the mortice in the post complete. Tomorrow I’ll do the other brace mortice in the wall plate and we will see how it all fits together. Ben is doing the same joints at the other end of the building. If the weather holds we should have all elements of the rear wall complete by the end of play tomorrow.