[Update: these trestles proved to be pretty unstable (and dangerous) and were later modified. See Remodelling the Trestles]

Today my son Luke came over and we started making the eight trestles we were going to need to make up the frame. We followed this method and design.

The attraction of these was their simplicity and as we needed eight, we didn’t want anything complicated. However, we did make a ‘mistake’ and cut the pieces for the horizontal ‘i-beam’ much shorter than shown in the video. When we realised – we had more timber left over than we should have had – we decided that this was a good thing as they were going to be used in a fairly confined space and we didn’t them to take up all the space.

We also used end braces made for 4 x 2 timber and not plywood. These trestles are going to be out in the rain and our judgement was that plywood would come to pieces.

The other thing is that, due to the straight legs, this is an inherently unstable design and this may be more of an issue with shorter trestles.

Anyway, this is the finished result. 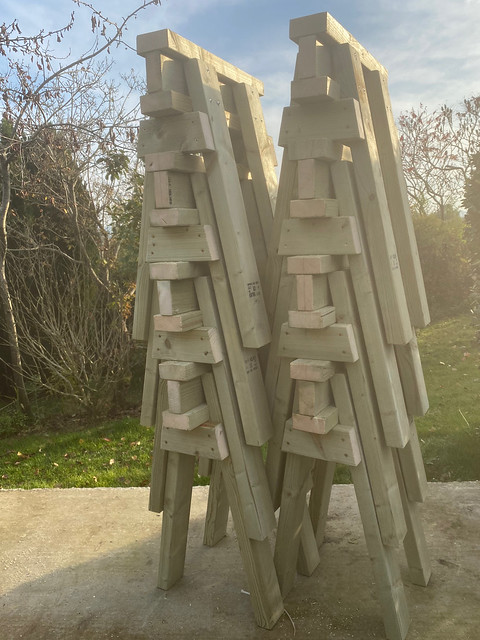