The Plan – the green oak barn

The first thing was to draw up detailed plans. I used EazyDraw to do this. This isn’t a CAD/CAM program but I had it and know how to use it.

When it came to designing the detail of the frame I realised that the key features of it – the truss design, the size and position of the wind braces, the post sizes – would be very similar to those in our bedroom and so I copied these for the garage plan. 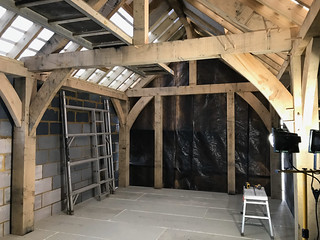 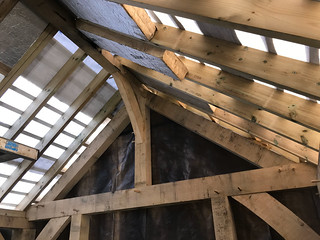 Initially my focus was on the oak frame itself as we wanted to get that ordered and on site before Brexit complicated things and likely made things more expensive. The oak comes from France. At this stage we did consider how the oak frame will interface with other parts of the structure eg the wall panels (oak feather board) and the softwood roof. However, these elements only change the details of how the frame is constructed and don’t significantly effect the amount of green oak we need. These details include the position of the wind braces – should the be central or off-centre – and the precise position of the principle rafters. Although the position of the principle rafters does effect their length and in turn the length of the king posts, it doesn’t change these lengths that much. Instead of deciding this detail at this stage we decided to order oak pieces long enough to accommodate the longest principle rafters and king posts we could possibly need.